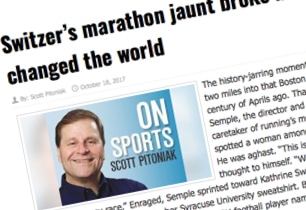 The history-jarring moment occurred roughly two miles into that Boston Marathon a half-century of Aprils ago. That’s when Jock Semple, the director and self-appointed caretaker of running’s most prestigious race, spotted a woman among the competitors. He was aghast. “This is sacrilege,’’ he thought to himself. “Women aren’t allowed to compete in my race.” Enraged, Semple sprinted toward Kathrine Switzer and attempted to rip off the No. 261 bib pinned to her Syracuse University sweatshirt. But before he could complete the task, Switzer’s boyfriend, a burly SU football player named Tom Miller, sent Semple sprawling with a body block.

“It really scared the hell out of me when Jock came out of nowhere and grabbed me,’’ Switzer recalled recently. “After I got over the shock of it, I began experiencing this horrible sinking feeling that I had done something terribly wrong. I was so embarrassed I wanted to crawl into the nearest hole. I wanted to go home to my mother. I felt as if I had screwed up this prestigious race. I was actually worried that I was going to be arrested for crashing this all-male event.”

Her sense of dread didn’t last long. Fear and humiliation quickly turned to anger and a revelation that something bigger was afoot.

“It dawned on me that if I quit everybody would say I was a clown, that this was just some publicity stunt,’’ she said. “If I walked off that course, Jock and all the others like him would win. They would say, ‘See, we told you so. We told you women couldn’t do things like run marathons because they are inferior, too fragile.’ It would play perfectly into their stereotypes.”

At that moment, Switzer no longer was running just for herself. She turned to Arnie Briggs, the assistant Syracuse men’s cross country coach who had taken her under his wing, and said resolutely: “I’m finishing this race no matter what.”

And that’s what she did that raw April 19, 1967 morning, becoming the first woman to officially run and complete the Boston Marathon. By finishing that race, she had started a revolution — a revolution that would profoundly alter the course of her life and the lives of women throughout the world. The day after the marathon, photos of Semple’s attack were splashed in newspapers around the globe. They sparked a furor and wound up being featured in Life magazine’s “100 Photographs that Changed the World.”

“I had no intention of starting a revolution when I plopped down my $2 entry fee,’’ said Switzer, who will deliver the keynote address at the Baden Street Settlement Gala at the Holiday Inn Downtown Friday evening. “My goal was to run my first marathon. It was as simple as that.”

After traversing those 26.2 miles, the Syracuse University alumna would begin a new marathon as a leading women’s rights advocate. Five years after her audacious debut, women were officially allowed to compete in the Boston Marathon. Two years later, Switzer became the first woman across the finish line at the New York City Marathon.

She went on to run more than 40 marathons and form an international running program for Avon Products Inc. — the international cosmetics giant — organizing more than 400 races in 27 countries for more than a million women. She also successfully led the drive to make the women’s marathon an official Olympic event, just as it had always been for the men. Her advocacy continues today through her 261 Fearless foundation, which uses running as a vehicle to empower and unite women across the globe.

“One of the things I learned from Arnie was that running can make you a hero in your own life,’’ Switzer said. “And I’m not just talking about competing in marathons or 5Ks or 10Ks. Just getting out there and putting one foot in front of another for any distance, no matter how short or even if you have to walk, gives you a sense of accomplishment and can be so personally uplifting. And that can carry over into every aspect of your life.

“I’m so proud of what we’ve been able to achieve empowering women not only here, but in Japan and Africa and South America, where women have long been treated like third-class citizens. Running has given so many females the belief and courage to overcome obstacles in their lives; to get that college education or get out of an abusive relationship or seek a better job. It’s all about moving forward, even when you might not feel like it.”

For a fleeting moment, after being assaulted early into her marathon debut, she didn’t feel like moving forward. But then she considered the ramifications — for her and so many others. “Had I given up, I believe I would have set the women’s movement back many, many years,’’ said Switzer, who was inducted into the National Women’s Hall of Fame in Seneca Falls in 2011. “We all have our moments of destiny. Mine didn’t occur when Jock attacked me. Mine occurred when I made the decision to finish that race.”

Last April, Switzer returned to run Boston. She has been back almost every year for four decades, providing television commentary, but she hadn’t run the race since the late 1970s. “I had done so much media ahead of time talking about the 50th anniversary that I was exhausted by the time this year’s race started,’’ she said. “I was actually worried that I might not have the energy to complete the race, and then people would be remembering me as that 70-year-old broad who couldn’t finish the Boston Marathon.”

Her concerns were quickly allayed. Buoyed by the adrenaline rush from the hundreds of thousands who lined the streets, Switzer felt, at times, as if she were running on air. Her past and present converged several times. She couldn’t help but notice the stark contrasts. On this day, the weather was absolutely gorgeous, perfect conditions for running. And there were so many signs of support being held up by spectators. When fans recognized her, they would applaud and shout out things like, “You go girl! You’re fearless.” Back in 1967, Switzer was greeted with wind and sleet and dagger-stares from the smattering of fans who watched the race. She vividly remembers comments from men telling her she should go home and make her husband lunch.

“When I finished that first marathon, Semple and his crew told us we had been disqualified and that we were being banished from the Amateur Athletic Union, which was a big deal in those days, akin to being excommunicated from the church,’’ she said. “Sadly, the actions were being taken even though we hadn’t broken any rules. There was nothing in writing about gender restrictions when I signed up as ‘K. Switzer.’ It was such a downer. Talk about raining on our parade.”

Fifty years later, her parade would conclude amid radiant sunshine and roaring cheers. An announcement was made that her No. 261 race bib was being permanently retired in her honor. “People made me feel so special every step of the way at this year’s marathon,’’ she said. “It truly was one of the most profound experiences of my life.”

Two years before Neil Armstrong set foot on the moon and took that one small step for man and that one giant leap for mankind, Kathrine Switzer took thousands of small steps that resulted in one giant leap for womankind. By putting one foot in front of another that dank New England day a half century ago, by moving forward even when confronted with fear and doubt, she became a hero not only in her own life, but also in the lives of millions of others.