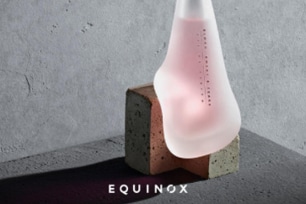 Fun Fact: Equinox has a fragrance made with real DNA from the legendary runner Kathrine Switzer and it’s on display in its Franklin Street gym.

Switzer’s claim to fame comes from being the first woman to run the Boston Marathon as an accidentally numbered entry. During the 1967 race, Marathon official Jock Semple attempted to stop her mid-run and tried to tear off her bib, but Switzer’s then-boyfriend Thomas Miller pushed him away in what would be one of the most iconic photos in marathon history.

Flash forward to today, and Switzer’s actual blood, sweat and tears are now a part of the blush-colored concoction currently located in our Financial District. The mixture isn’t hiding anything, going by the apt name of Eau de Blood, Sweat & Tears. And despite being deemed a fragrance, it’s oddly odorless … which could actually be considered a pro given its B.O. potential.