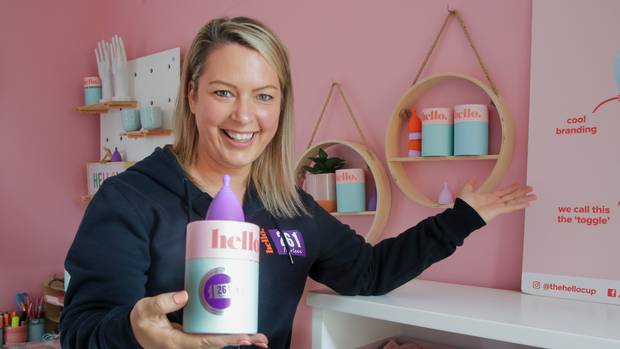 Nearly a year after setting up a menstrual cup manufacturing business in Hawke’s Bay, two lifelong best friends have hit a huge deal to help female runners at this year’s New York Marathon.

The Hello Cup is a reusable hygienic cup that is an alternative to traditional feminine sanitary products. It holds three times as much fluid as tampons and can be worn for up to 12 hours.

Founded by Havelock North resident Robyn McLean and her friend Mary Bond in December, Hello Cup manufactures thousands of cups every month from a factory in Onekawa.

It has just announced a new deal with global women’s running and empowerment network 261 Fearless to sell special-edition cups at the marathon.

The collaboration aims to provide women a sustainable solution to their menstrual periods and a percentage of the sales of the special edition “261 Fearless cups” will benefit the global non-profit organisation to further its mission of empowering women globally through running.

261 Fearless founder and 1974 NYC Marathon winner Kathrine Switzer said it was “appropriate” they would be launching the partnership at a running event that featured more than 20,000 women.

“Everyone is nervous on race morning, but few are as nervous as those 3000 or so women who are also having their periods.

“While we’re hoping to help that situation, our partnership with Hello Cup is much broader than a race; it’s about women everywhere, especially those who are missing valuable days of school, work and social engagement.

“Often they are poor and cannot afford the monthly expense of sanitary products. 261 Fearless hopes to equip these disadvantaged girls and women with basic feminine humanitarian needs so they can engage and flourish. “

Hello Cup has become a global Kiwi success story since its inception late last year, but McLean and Bond said the opportunity to work with Kathrine and the 261 had been a highlight.

“We’re thrilled to be helping solve a conundrum female athletes have experienced for decades, as well as reaching out to women around the world. We want women to be empowered and educated about both their bodies and their options – and we’re so grateful for this opportunity to broadcast our message with 261 Fearless.”