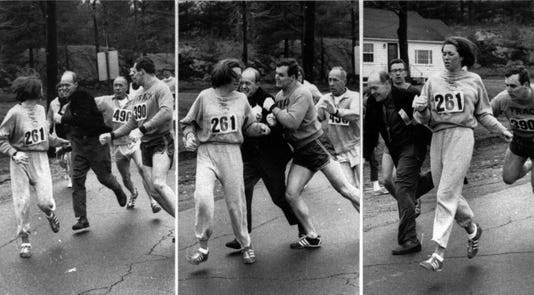 A mile and a half into Kathrine Switzer’s first Boston Marathon, she was attacked by a race official. It was 1967 and women didn’t run marathons. Not officially, at least.

The race official ran up behind Switzer, shouting and clawing at her sweatshirt. He was trying to pull off her bib with her race number on it.

Switzer was a student at Syracuse University. She had been running since grade school, but her university had no women’s sports.

“I went and asked the track coach if I could run on the men’s track team,” Switzer remembers. “He said, ‘No, I don’t think so. That’s against NCAA rules, but we’d welcome you to come work out with the team.’” Switzer accepted the offer, training with the men’s team and its volunteer coach.

The volunteer coach was 50-year-old Arnie Briggs. He was also Syracuse’s mailman and an ex-marathon runner. “He took me under his wing and coached me every day to run longer and not worry about going fast,” Switzer said.

As they ran together, Briggs spoke about running the Boston Marathon.