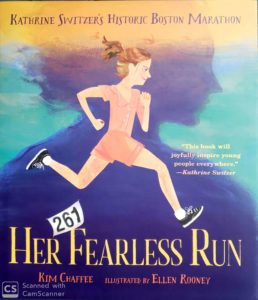 Thousands of women ran in the Boston Marathon this year, but back in 1967, 20-year-old Kathrine Switzer was the only woman on the course. Her decision to participate in the marathon that morning sparked a social revolution that has given women across the world the motivation to run for over 50 years.

In 1967, Switzer was a student at Syracuse University studying journalism, who spent her off-hours training alongside the men’s cross-country team. Her coach was impressed as her times got faster and faster so he decided to take Switzer along with the track team to compete in the Boston Marathon.

Switzer registered for the race by filling out the entry form just like everyone else, but instead of writing out her first name, she signed the sheet with her initials “KV.” Her father misspelled Kathrine on her birth certificate and KV has been her nickname since childhood. When she filled out the entry form to register for the race and signed her first name as “KV” instead of “Kathrine,” it was nothing out of the ordinary. No one suspected that KV was a woman and there were no rules specified about gender in the rulebook.