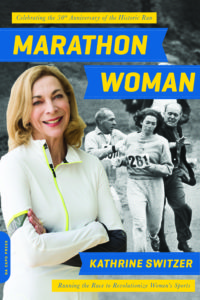 Marathon Woman is an autobiographical narrative that chronicles the life of Switzer including her iconic 1967 Boston
Marathon run through her advocacy work with the International Olympic Committee to include the women’s marathon in the 1984 Olympic Games. Described tonally as a “female Rocky,” Marathon Woman is a real-life, universal story about an underdog overcoming adversity and discrimination through persistence, skill, and strength of character to achieve gender-equality, personal empowerment, and self-discovery.

“This is the first time I’ve ever optioned the rights to my book and I’m delighted to entrust my story with Ed Richardson of Chastain Film Capital,” said Switzer. “We are at a critical moment in women’s history and now, more than ever, it’s imperative that stories of empowerment reach the masses to continue the mission of women’s equality.” Ed Richardson is the owner of development and production fund Chastain Film Capital. Richardson will produce Marathon Woman via his production company R&R Productions Worldwide and is repped by Andrew Velcoff of the law firm Greenberg Tauring, LLP.

“Kathrine Switzer’s fight in the face of systematic bias began in 1967, and she is fighting for equality as we speak this
morning,” said Richardson. “I’ve long been inspired by Kathrine’s infectious energy. She is a force of nature. I’m so
proud to help further spread her story to a global audience. The path she has carved is quite simply a call to action to inspire positive change.”

About Kathrine Switzer:
An Iconic athlete, author, and advocate for sports and social causes, Switzer was the first woman to officially enter and then run the Boston Marathon. Switzer has been honored for her achievements, such as running the Boston Marathon again in 2017 at age 70, fifty years after her first historic run in 1967, and also in 2017 running the New York Marathon 43 years after she won it. Switzer was inducted to the USA National Women’s Hall of Fame where she was recognized for creating positive social change throughout her storied career. She has run 42 marathons, served as an Emmy Award-winning TV commentator, and is the founder of ‘261 Fearless’ which empowers women globally through running.

For more information please visit her online at www.kathrineswitzer.com or at her non-profit at www.261fearless.org

Posted in In the News