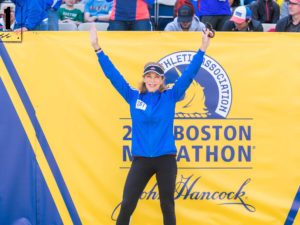 It was a chilly day in Boston on the morning of April 19, 1967. It had started to sleet, adding to the chill. Forgoing the more exposed t-shirt and shorts, most runners had decided to keep their sweatshirts and pants on. Among the runners was Kathrine Switzer, a 20-year-old woman, excited to run in her first marathon and prove to her coach
that females could run in a long distance race without harming their “fragile” bodies. When she approached the start line, she had no idea the type of journey she was about to embark on. Due to Switzer’s courage and completion of the race, women officially became welcomed into the Boston Marathon, endurance racing was inaugurated into the Olympics, and she inspired thousands of women across the world to become runners. Switzer answers some of the most frequently asked inquires about the Boston Marathon and how she’s been helping women’s running gain recognition and validation ever since.

Why did you start running and how old were you when you started? I started running at age 12 when my father encouraged me to run a mile a day so I could make the field hockey team in my high school. (There were no intermediate schools in those days; I began high school at age 12).