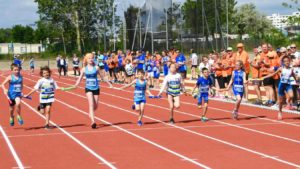 This is a photo from the June 2019 opening of the Kathrine Switzer Stadium track, they opened it when it was finished so the public could use it, and it was opened by these young children running a 100 meter relay around the track all wearing 261 bibs. Photo credit is Jean Louis Burnot.

Kathrine Switzer to Travel to Dunkirk, France to Participate in Ceremonies

Posted in In the News