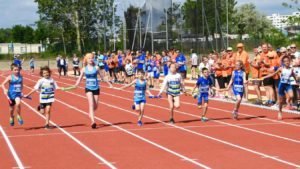 Dunkirk City Council and Mayor Patrice Vergriete recently dedicated their new stadium  “Stade d’Athlétisme Kathrine Switzer” (“Kathrine Switzer Stadium”) during the official inauguration ceremonies which were held on September 14-15. “Kathrine Switzer made a very strong and symbolic statement when she competed in the 1967 Boston Marathon and paved the way for women to compete in long-distance running events, athletics and all of sport,” says Mayor Vergriete

The city of Dunkirk, France celebrated their new stadium to honor running pioneer and women’s sports icon, Kathrine Switzer. Switzer was the first woman to officially registered in the 1967 Boston Marathon.

Before Switzer traveling to Dunkirk for the festivities, I had the opportunity to do an email interview on her thoughts on receiving this award.

Q: Congrats Katherine on receiving another prestigious award/honor. Where were you when you heard the news?

A: Thank you!  I was working at my computer in May and an email came from the Mayor of Dunkirk, Patrice Vergriete.
At first, I thought it was a joke, honestly. Then I read it again and realized how sincere it was and replied. They originally wanted me to come in June but my schedule was already booked, so they opened the track so people could use it, and made the official dedication date for when I could come.  Attached is a photo of the opening of the track–they had young people doing a 100 m relay, all wearing 261.