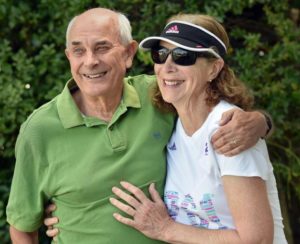 Roger Robinson, When Running Made History, and

“Running Royalty” is coming to Palmerston North when legendary runners and authors Roger Robinson and Kathrine Switzer will be at three local events on 4 – 5 February.

On Tuesday 4 Feb, at 6 pm, they will be guests at the Manawatu Striders’ Super Sevens event.  This is a hugely popular community event with a small registration fee of $4 per person.

On Wednesday 5 Feb, 6pm, they will be at Shoe Clinic on Broadway to talk about their books When Running Made History and Marathon Woman, which they will be signing personally. Also, on Wednesday morning, 9:30am, Switzer will make a personal appearance at the Women’s 261 Fearless Meet Run, Waterloo Park.

The Shoe Clinic book signing and presentation evening is hosted by the Manawatu Striders. This event is free and open to the public.

Neither Robinson nor Switzer are strangers to Palmerston North, although it’s been awhile since they have been in town.

“’Palmy’  was the scene of some of my toughest races and road relays,”  commented Robinson, who is as well known in New Zealand as a champion runner as he is a world-renown author. In the 1970s-80s the now master runner extraordinaire represented New Zealand in the World Cross Country Championships and set masters records in both the Boston and New York City Marathons.  He is the author of several popular running books. The latest, When Running Made History, has been named by several leading reviewers as ‘The best running book ever published.’  Robinson is also known in New Zealand for his stadium announcing, TV commentaries, and journalism.

“When I first came from the USA to visit Palmerston North 36 years ago, I was delighted to see a very active women’s running community,” added Switzer. “I’ll never forget it—I was a pretty good runner then and I think I finished almost last in this cross country race!”  Then as now, Switzer was best known for her historic gender barrier-breaking run in the 1967 Boston Marathon where she was the first woman to officially register and run the event.  She was physically attacked mid-race by the race director for doing so, but prevailed, finished the race, and went on to change women’s running history.  She won the 1974 New York City Marathon, authored the best-selling memoir Marathon Woman,  and is also the founder of 261 Fearless, a global non-profit that empowers women through running.  She will meet with the Palmerston North chapter of the 261 Club on Wednesday morning and invites all local women to join her and Kate Southern, president of the 261 Club New Zealand, Palmerston North.

Together, Robinson and Switzer have also made their own personal history: They met through running,  and have been married for 33 years, now dividing their time between the Hudson Valley, USA, and Wellington, where Robinson is emeritus professor of English.  Together, they write, speak and have often done stadium and television commentaries together. Robinson is again stunning the world, now by running well at age 80, on two replaced knees.  Switzer pushed back the clock too, when at 70, she ran the Boston Marathon again for the 50th anniversary of her historic run. She was the first woman to run a marathon 50 years after her first one.

“We are so excited to have Kathrine and Roger in Palmerston North,” stated Kate Southern, the Club Coordinator of the Manawatu Striders.  They are funny, lively and will inspire and encourage our community in a big way on Feb.4 & 5.  This is an excellent opportunity to come and meet two of the greats in the running world!

Short Bios of Switzer and Robinson

An iconic athlete, author, Emmy-award winning broadcaster and advocate for sports and social causes, Kathrine Switzer was the first woman to officially register and run the Boston Marathon in 1967. She was attacked in the race by an angry official who tried to rip off her bib number (#261) and throw her out of the race because she was a woman. She finished the 26.2 mile distance anyway and went on win the 1974 New York City Marathon and to champion women in the sport globally, most notably leading the drive to make the women’s marathon an official Olympic event in 1984. Now, 58% of all runners in the USA are women. To celebrate this social revolution,  and to support another on active aging, Switzer ran the Boston Marathon again, in 2017 at age 70, on the 50th anniversary of her iconic run, finishing only 24 minutes slower than she did when she was 20.  This run launched her non-profit ‘261 Fearless’ –named after that famous bib number–which empowers women globally though running. She has been honored widely for her achievements including being inducted into the USA National Women’s Hall of Fame which recognized her for creating positive social change throughout her storied career.

Roger Robinson is a leading historian of running and award-winning running author and journalist. His books include When Running Made History,  The Spirit of the Marathon, Running in Literature and 26.2 Marathon Stories, as well as scholarly works like the Oxford Companion to New Zealand Literature. He has won four writing awards in USA, including one from the Academy of Orthopedic Surgeons for articles about running on knee replacements. He was stadium announcer for the Commonwealth Games in 1974 and 1990, and in the 1980s was leading commentator on running for TVNZ. As a runner, Roger represented England and later New Zealand in world championships and set masters records at the Boston, New York and other marathons. He is Emeritus Professor of English at Victoria University of Wellington, and author of 20 books.