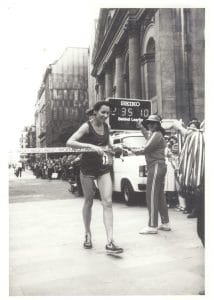 Hi Friends! A massive 40th anniversary for us!   August 3, 1980: The Avon London International Women’s Marathon, with 27 countries and 5 continents represented, exceeded the International Olympic Requirements for the inclusion of a new event, and 7 months later the International Olympic Committee voted in the first Women’s Olympic Marathon for the 1984 Games. This London event, years of lobbying, and Avon’s women’s races all over the world had ignited a global women’s running revolution and made it happen. Lorraine Moller, from New Zealand,  was the winner defeating a world class field that included Joan Benoit (Samuelson) and Joyce Smith. Here is Lorraine breaking the tape in front of Guild Hall in downtown London.  Interesting fact:  this was the first time 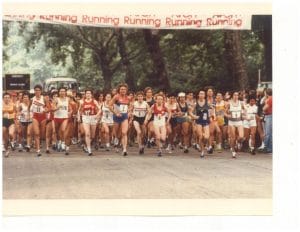 in history that downtown London streets were closed for anyone but the Queen’s processionals, and this race served as the design model for what became in 1981 the great London Marathon. Some days are the happiest in your life, and for me, as the creator and director of the whole Avon International Running Circuit, this was sure one of them!  Let’s keep pushing Fearlessly on, folks!  Cheers, Kathrine
Posted in Uncategorized