In that race, the 1967 Boston Marathon, she was physically attacked by the race co-director for officially registering and running in what was then considered a men’s only race.

By the time she finished that race, Kathrine vowed to create opportunities for women in running, and also to become a better athlete herself.  This promise subsequently led to a life and career with a running focus.  Kathrine’s determination to become the best possible athlete she could be is the subject of this backgrounder.

Kathrine Switzer’s athletic life began at age 12 when her father encouraged her to run a mile a day to make her high school’s field hockey team at James Madison and George C. Marshall High Schools in Vienna, VA.  She played field hockey and also girls’ basketball, but continued to run a mile a day as she felt that is what gave her strength and stamina, and also empowerment.

After high school graduation (1964), she began running three miles a day to prepare for the field hockey team at Lynchburg College, in Lynchburg, VA.  Here she also played women’s basketball and lacrosse. In the spring of 1966, she and one of her hockey teammates were   asked by the men’s track coach to run the mile and 880 for the men’s track team. She was very welcomed by all the male runners.  This event solidified in her mind that she wanted to run competitively.   She also competed at this time in several AAU (Amateur Athletic Union, the then governing body of the sport) competitions, in the longest available events for women, which were the 440 and 880 yards.  Often she would have to run the 220, as that was the only event available in the women’s competitions. Lacking natural speed, she was frustrated that these races were not long enough for her abilities.

Kathrine also was studying journalism, as she wanted to be a sports writer, and decided in 1966 to transfer to Syracuse University’s famed Newhouse School of Communications to get a specific degree.  At Syracuse, she was somewhat dismayed to find no intercollegiate sports at all for women, and that the men in many sports had high powered scholarships.

Undaunted, she asked the men’s cross country coach if she could run for the men’s team.  He explained that it was against NCAA rules for a woman to be officially on a men’s team, but that she was welcome to train with the men.  She did, and again the team welcomed her.

It was on the Syracuse cross-country course that she first met 50-year-old Arnie Briggs, the university mailman who was a volunteer team manager. Briggs had run with the men’s team for 25 years for his own after-work training and was a well-known upstate New York marathoner who had run 15 Boston Marathons.  Although injured and retired from competitive running, he took Kathrine under his wing and helped her run.  He told her stories about road running, and especially the Boston Marathon which was then one of the most famous races in the world.

Training for the 1967 Boston Marathon

This entranced Kathrine and she told Arnie she wanted to run the Boston Marathon.  They argued as Briggs insisted no woman could run the marathon distance, but said if Kathrine proved she could do the distance in practice he’d take her to Boston.  They trained mightily together, and on the day of the marathon test run, Kathrine not only ran 26.2 miles, she ran 31 miles, ‘just to be sure she could finish Boston.’

Briggs helped Kathrine register, because he said Boston was a serious and important race, and you must officially register.  Kathrine signs her name ‘K.V.Switzer’ and when the entry form arrived in Boston, officials assumed K.V. stood for a man’s name.  When she was two miles into the race, Jock Semple, the race co-director, spotted her from the press bus, jumped off and grabbed her and tried to rip her numbers off, cursing at her.  In one of sport’s most celebrated moments, Kathrine’s boyfriend, who was also running in the race, threw a shoulder charge into Semple and knocked him out of the race instead. Photographers on the press truck captured the moment on film and sent it around the world.  Kathrine, a little shaky at first, went on to finish, vowing to finish the race on her hands and knees if she had to.

Running for a Revolution

From then on, much of Kathrine’s own running was about proving women’s capability. More and more women also began to run, and together they campaigned vocally for a women’s right to be included. These women took their running seriously and mostly were treated by the male athletes as equals.  Kathrine continued to run at Boston and was part of the campaign with other women to make women official competitors; they were successful at last in 1972.

Kathrine then began training with increasingly difficult intensity, reaching a peak of 110 miles a week in 13 weekly training sessions. She entered and was invited to run in many races as the first and only woman. Her times began improving rapidly.  Finally, in her 32nd marathon, Kathrine won the 1974  New York City Marathon and in 1975, she ran her best time of 2:51 in the Boston Marathon. The time was then ranked 6th in the world.

After her demanding competitive career which she combined with a full time job, she had the opportunity in 1977 to create the Avon International Running Circuit, a global series of women’s races that became her life work.  The demands of this career precluded serious training, so she continued to run for fitness and fun, and ran races as fast as she could but no longer considered herself competitive. The Avon International Running Circuit grew to 400 races in 27 countries for over a million women and, along with Kathrine’s tireless lobbying, was a main factor in getting the women’s marathon into the Olympic Games for the first time, (1984, Los Angeles). 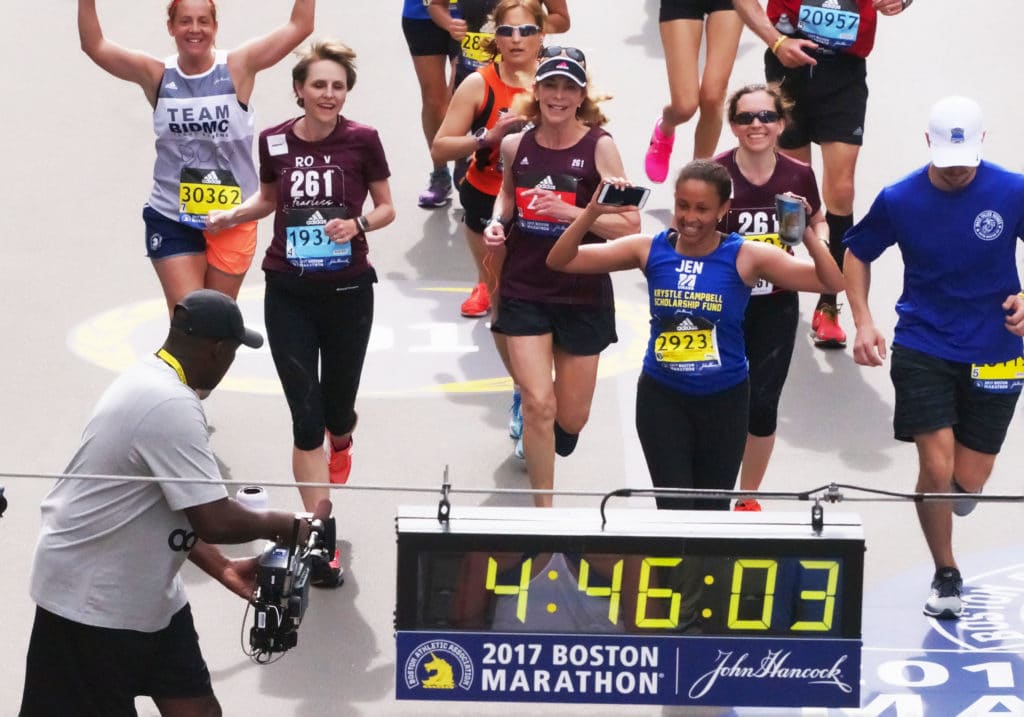 Kathrine has run 39 marathons, and hundreds of road races of all distances all over the world. She has been running regularly for 53 years, and at 66 is still running marathons. Her last marathon was 2011 Berlin, and her time was 4:36.

Note from Kathrine: I am posting my best times as a way of giving encouragement to the many of you, who like me, are not naturally talented. You can see that through very hard training, I was able to build stamina and sustain what speed I did have over longer distances. This can be accomplished by most people who are willing to put in the effort. Training works!

Take a look at Kathrine’s Running and Walking Training Programs.